For those who fancy jigsaw puzzles, did you know that the first one is believed to be produced in 1760 by John Spilsbury, a Londoner engraver and mapmaker. It was used for educational purposes because teachers found it helpful teaching children geography and continued to be used in such way until 1820. The final result was a hardwood map which was cut in different shapes, displaying pieces of countries. Just like nowadays, children had to put the puzzle together. 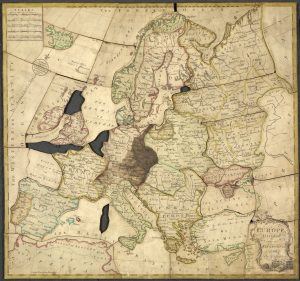 Later on, the jigsaw puzzle went through some changes in the way it was made.  It is said that, in 1820 pieces were cut with a treadle saw, but they actually used a fretsaw instead of a jigsaw. Another change came at the end of the century. They decided to use plywood to make it more appealing. Pieces were traced with a pencil in order to draw the lines before cutting the map, and illustrations were used in their front to create a nice and captivating design for the buyers. If you are driven by your curiosity, such pencil tracings are found in old puzzles even nowadays.

Thus, in the beginning of the 1900’s manufacturers continued producing wooden puzzles thinking the cardboard ones were not as exclusive as those made of cardboard. Was it actually the real reason? Or it was the profit they generated by selling wooden jigsaw puzzles? The difference was not small. Just to give you an idea, the cost of a wooden jigsaw puzzle was $1.00 but the cardboard one cost 25¢.

The Golden Age of jigsaw puzzles

The real success of jigsaw puzzles started in the 1920s and 1930’, which is considered to be the Golden Age. Quality puzzles resembled significant scenes, excitement for the innovative sectors of rail and shipping, and of course, new marketing strategies. All this was launched and produced by companies such as Chad Valley and Victory in Great Britain and Einson-Freeman, Viking and many more in the United States.

More focus on ages rather than children

What did these companies have in mind while creating the new version of jigsaw puzzles? All of them wanted to expand the market and focus on more ages rather than children. Adults came to their focus, and gave them the desire to create jigsaw puzzles that were more difficult but still attractive. A successful idea was giving a jigsaw puzzle away if customers bought an item. For example, Einson-Freeman of Long Island City in New York started to apply such strategy in 1931, giving a jigsaw puzzle for every purchase of toothbrushes. The years of the Great Depression in September of 1931 gave space for a new strategy: the weekly puzzle. This was implemented firstly in the United States, printing 12,000 puzzles. The number continued to grow and reached 200,000.

This was a new way of entertaining people since those years were hard to live and activities were somehow not as fun as playing a jigsaw puzzle. It was considered an attractive tool for individuals or even groups of people or friends. What’s more interesting is the fact that those jigsaw puzzles were used by more than a family. They were shared with other relatives right after one of them had finished and solved the puzzle. In other words, it was a cheap deal and a good tool to fight stress and anxiety. Not only children, but even adults seemed to enjoy jigsaw puzzles so much they continued buying them. Different shapes and images made them every time more curious.

Jigsaw puzzles have resisted time, they didn’t become rusty and forgotten with time, instead, people, like adults or parent continue to buy such pastime games for entertainment purposes. Some teachers, especially in kindergarten or primary school use jigsaw puzzles for a fun and diverse lesson to make children learn in a more efficient way. Assembling jigsaw puzzles is healthier than playing video games. Our brain reacts in a way that stimulates our concentration and focus, memory improves and our imagination plays more with the jigsaw puzzle’s images. Video games are somehow fun but according to studies, they are more addictive than jigsaw puzzles. Digital entertainment comes with side effects, such as eye tiredness due to blue rays but that doesn’t happen with jigsaw puzzles.
Make a wise choice and have fun at the same time.